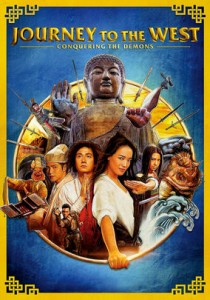 N and I recently watched Journey to the West: Conquering the Demons.  I love a good kung fu movie and Stephen Chow makes some of the best.

Journey to the West is the story an aspiring Buddhist demon hunter.  In the course of trying to protect a village he gets thrown together with another demon hunter and develops complicated feelings for her.  Hijinks and epic battles ensue!

The movie is visually stunning with great effects and fight choreography.   and it’s very funny.  It also made me want to find out more about the classic Chinese story that it’s a prequel for.

We didn’t let the kids watch it with us.  There are some intense scenes and some of the encounters with the demons rack up a lot of victims.  Maybe 12 and up?  I dunno.

Anyway, check out Journey to the West if you get the chance.  Even if you’re generally not into kungfu movies it’s very entertaining.

After talking to friends and literally spending a few hours checking out hotels online (because I like to stress myself out) I booked us at the Residence Inn Anaheim Resort Area/Garden Grove.

I wanted a suite so the kids would have their own room and we would have a fridge for E’s food.  Our suite was spacious with two bedrooms, each with their own TVs and adjoining bathrooms, a living room with another TV, a dining table for 4 and a full kitchen (full-sized fridge, dishwasher, stove/oven, and microwave).  Having all that space was great and meant we could easily separate the kids when they got cranky/or when Mimi needed to take a nap.

Overall, we really liked the Residence Inn Anaheim Resort Area/Garden Grove.  I think it’s a good place to stay if you’re going to Disneyland and you don’t mind not being able to walk to the park.

On Saturday, N and I took the kids to an artists’ studio sale Linnie was participating in. The artists at the sale were cleaning out their studios and selling pieces at a big discounts.

I have a serious weakness when it comes to art (and let’s be honest–crafting books, cook books, and fabric) and enjoy collecting things that I like. We’ve run out of wall space in our house but I tell myself that when we eventually move it will be nice to already have pieces that means something to us to decorate the house with. (That makes sense, right? Or do I just sound like an unwell person on Hoarders?)

Linnie was selling mostly older pieces and I snagged this original on paper that I liked for $25.  The photo I took of it isn’t very clear but the painting’s colors and texture are nice and it reminds me of a Bodhisattva so, score.

We were the only people at the art sale with small children which was a bit nerve-wracking. E and Mimi were both really good though so after the sale we stopped by two bakeries (one vegan for E, one not) and picked up a few treats.

We had been wanting to visit Les Madeleines so we picked up a few macaroons and tried the  specialty, their Kouing Aman pastries which they’re well-known for.

IT WAS SO GOOD.

The top was crisp and caramelized and the inside was soft and pillowy. It was buttery and sweet with just the right touch of salt. It’s a good thing the bakery is over 30 minutes away from our house because my fitness plans might be seriously derailed if it was more convenient.

If you’re local and you haven’t been to Les Madeleines, go! (Except not today because they’re closed on Mondays 🙂

I finally finished the baby quilt I’ve been working on for the past couple of months. Now I just need to take a few photos and get it boxed up and to the post office. I’m already planning out my next quilting project

Cluck Cluck Sew is one of the bigger quilting blogs so you might already know about it, but it’s one of my favorites. It’s always fun to see what Allison is working on and I really like the patterns she  creates and sells. She has also created a great collection of free tutorials (I used this one to make this baby quilt).

I’m not sure yet, but I’m leaning towards using Allison’s Pow-Wow pattern for my next project. It’s a bit more complicated than the straight squares or half-square-triangles I usually gravitate towards but still seems very manageable.

And I don’t know when or for who it will be for, but I really want to make one of her Suburbs quilts. Those little houses just slay me.

If you’re interested in quilting and don’t do so already, Cluck Cluck Sew is a great blog to follow.

I have two main weaknesses when it comes to impulse purchases: cookbooks and crafting books. I enjoy both types of books for the same reasons: lovely photos, clear instructions combined with personable narratives, and the chance to daydream of a world in which I create beautiful dinners every night and make heirloom quality crafts for all family and friends. And once in a while I even get off my butt and actually use them to cook or make something 🙂

Some craft books are definitely better than others. I thought I’d share some of my favorites with you so if you’re interested in a certain craft you wouldn’t have to waste your precious time scrolling through reviews on Amazon and waffling over your options. Benefit from my wasted time and money!

First up, quilting. I started quilting about two years ago and while I love looking at quilting books for inspiration the book I keep going back to for its clear instructions and photos is The Practical Guide to Patchwork

The how-tos in this book are great; I still pull it out every time I bind a quilt to double-check that I’m doing it right 🙂 You can find tutorials that cover the steps of quilt-making online, but I like having a book that I can refer to again and again.

Besides the basics of making a quilt, Hartman includes instructions for 12 quilt projects.  I haven’t made any of the quilts yet, but they’re modern and stylish and a great source for inspiration.  I particularly like how Hartman includes alternate color schemes for each project.

If you’re looking for a book to help you start quilting, The Practical Guide to Patchwork

is a great choice.

*This post isn’t sponsored in any way, but those are Amazon affiliate links.

Because of E’s food allergies he can’t eat traditionally-baked goods but there’s a great bakery in Salt Lake, City Cakes, that specializes in vegan items. We stop by whenever our family is up in Salt Lake and it’s become a family tradition to order our birthday cakes from them.

When I ordered my cake over the phone it when a little something like this:

Store clerk: “Do you want anything written on the cake?”
Me: “Happy birthday Faith.”
Store clerk: “And what’s your name?”
Me: (long pause) “…um…Faith?”
(Awkward laughter.)
And…scene!

The cake was worth that little bit of social awkwardness though because it was DELICIOUS!  Dense, moist lemon cake with raspberry filling and lemon buttercream.  Better than most normal store-bought cakes I’ve had.  Their buttercream icings are great but, word-to-the-wise, don’t get their “cream cheese” frosting.  Real vegans are probably fine with it, but to anyone who likes normal cream cheese it’s just not worth it.  Buttercream is the way to go.

Even though I told N not to get me anything for Valentine’s day (I’m counting the kitchen update as my own Valentine’s day/anniversary/birthday present), he surprised me with a set of the English translations of Oishinbo!

I know, what a sweetie, right? I received the first volume of Oishinbo

for my birthday last year and ever since then I’ve been wanting to read more.

Oishinbo is a popular, long-running Japanese cooking manga with over 100 million volumes in print. The story follows a young journalist and gourmand who has been assigned the task of creating the “Ultimate Menu,” a meal which will encompass the very essence of Japanese cuisine.

But our young hero’s father which whom he is estranged is working on creating a competing menu and they have all sorts of impassioned arguments over different aspects of Japanese cuisine.

I really enjoyed the first volume and I can’t wait to read the others. These English translations are compilations organized around a specific theme so sometimes the plot jumps around a little bit but VIZ has done a good job overall of editing the content together into an entertaining story.

They’re fun to read and when you’re finished you’ve actually learned something. If you’re interested in Japanese food at all I think you’ll like Oishinbo.

My brother-in-law’s new book is coming out next Tuesday! Right now I’m reading an advance copy and I’m really enjoying it.

If you, like me, you tend to read more fiction than nonfiction don’t let that scare you off. Maphead,

or {muh-FEED} as some of us call it, covers fascinating ground in an down-to-earth way and is funny to boot. It’s fun to read AND every time I set it down I also feel a bit smarter–bonus! Plus, there are some great bits about my adorable sister-in-law Mindy in it (which you will probably like even if you don’t know her).

So yeah, you should probably pick up a copy. Amazon has Maphead for preorder at $15

* If you don’t get one now, keep it in mind come Christmas time. Anyone who has at least a vague interest in the world and how it works will enjoy it but I think it would make a particularly great gift for those hard-to-shop-for guys in your life (especially if they run towards being smart and funny and a little/a lot on the nerdy side like the ones in my life.)

*This is an affiliate link. I was not compensated in any way for this review beyond the warm fuzzy feeling I get from sharing something I like with my readers and getting to brag a bit about my family.

With all the talk about photography lately I thought it noteworthy to mention that today is World Photography Day. As far I can tell isn’t a real holiday…yet! Let’s get together and make it happen, people!

I found out about it from the latest issue of the Photojojo newsletter which has a great roundup of photography ideas and inspiration. If you like photography I recommend subscribing. It’s always fun and interesting.

I especially liked this link from this last newsletter. SO great. I wonder if I could get E to model for photos like these.

So if you get the chance, have fun and take some pictures this weekend to celebrate World Photography Day!

Last week one of N’s friends at work took him to L&L Hawaiian Barbecue for lunch and N liked it a lot. So on Friday we made the drive to Provo to eat there for dinner–worth it!

I’ve never been to Hawaii and I had never heard of this chain before. But I have eaten a lot of Hawaiian and Korean food (Korean BBQ is a big influence with Hawaiian BBQ) and I thought the food was good. The service was unfriendly (bordering on surly) like it is at some small places but all the food we tried (ribs, chicken, pork) was super tasty. And the portions are HUGE; we had enough leftovers for lunch the next day. We will definitely be going back. If you decide to go, go hungry and early (they close at 8pm).