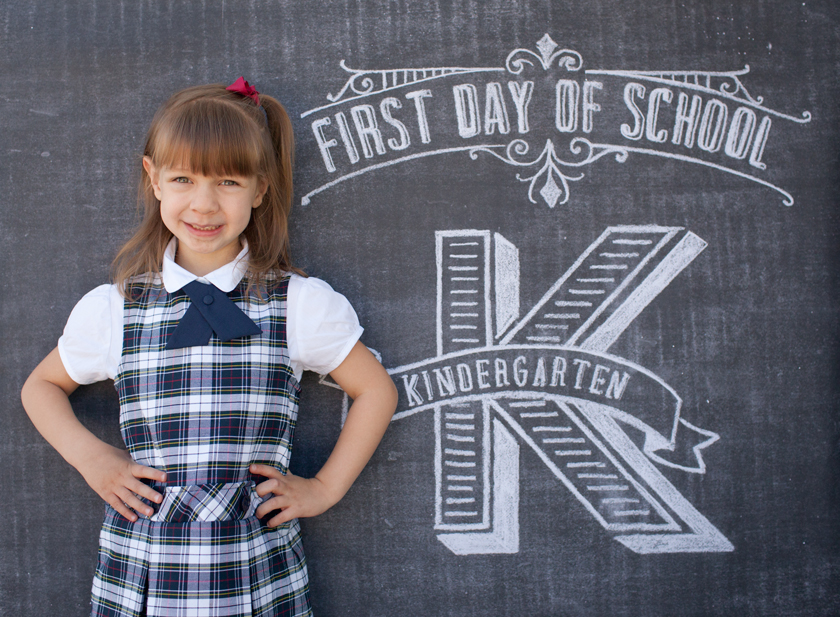 Today was Mimi’s first day of kindergarten!  She’s been a little nervous and has had lots of questions, mostly about if she’ll make friends and whether the kids will like her.

The day we got her new backpack she spent 15 minutes trying it on and practicing her “nice smile” in the mirror.  She wanted to make sure the kids at Kindergarten “won’t be scared” and would know she’s friendly.

(That sound you hear is my heart breaking a little-oof.)

But this morning as I snapped a few pictures of her before we headed to school she struck this pose and declared, “I’m a super hero!” 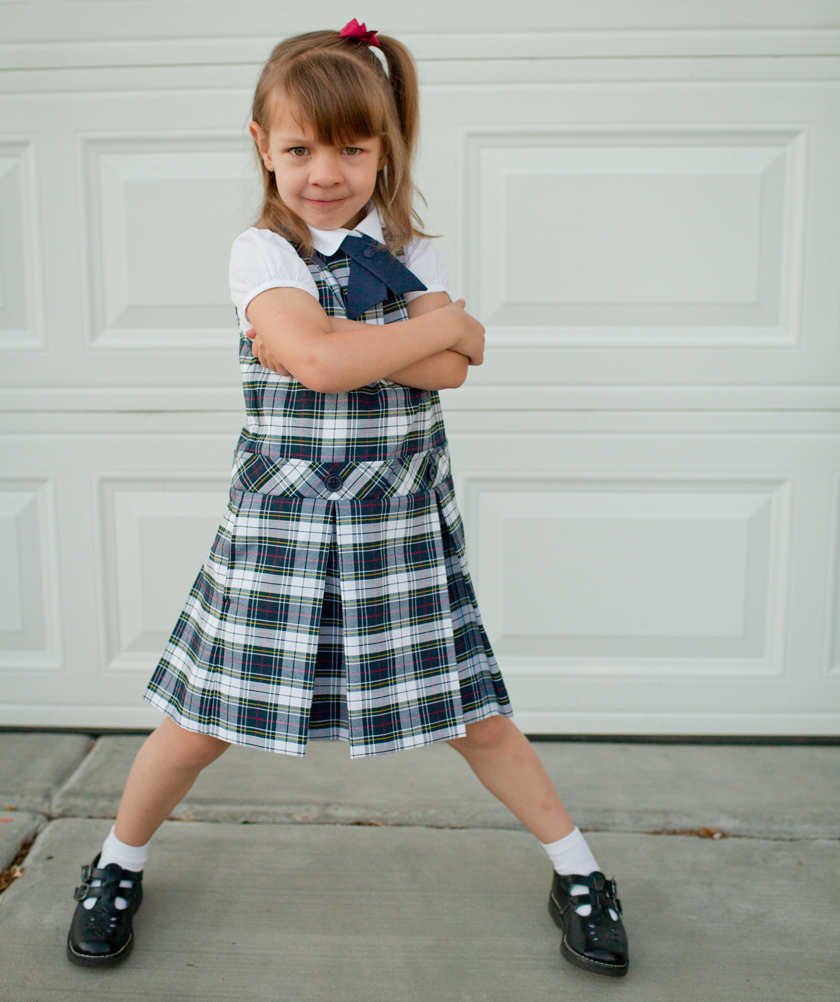 The extra-wide stance cracks me up but I couldn’t agree with her more.  All the heart-eyes.

Normally our carpool will drop the kids off in the morning but today I walked her into school.  She didn’t cry at all and neither did I.  We were both troopers 😉 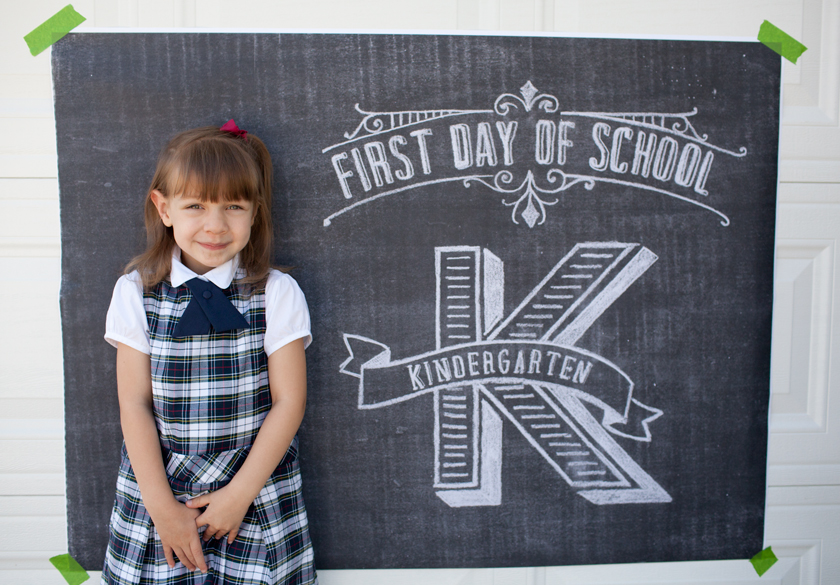 She came home happy and looking forward to going back.  I’m so proud of her.

He was excited to go to his new school but after we dropped him off Mimi kept looking at his empty car seat and asking where he was and whimpering.  E class is only two hours long so Mimi will be reunited with her idol/tormentor soon.

Last week I decided that it was time to say goodbye to Mimi’s baby mullet.

Her hair is so funny. It’s been growing in the back but the front and sides are the same length they were 6 months ago. I’ve been dying to put her hair into tiny baby pigtails but I guess I’ll be waiting for a while 🙂

Mimi has taken her own sweet time when it has come to moving around. She didn’t crawl until 11 months and when I took her in for a check-up at 16 months she had only taken a step or two on her own.

This time around I’ve been much more relaxed about growth milestones and mothering in general.  It was clear that Mimi was thriving and doing fine; she just didn’t want to venture out on her own yet.

But when we were at her check-up and her pediatrician suggested that we should x-ray Mimi’s hips if she still wasn’t walking by 18 months I felt the first little niggling worry creep into my mind.  What if something really was wrong?  Hip problems do run in N’s family.

But then, that very evening Mimi let go of the couch/table/chair and started staggering across the floor on her own, beaming from ear to ear.

It’s been a little over a week since then and she practices every chance she gets, doing laps around the room.  Her legs are already more steady and her walk is quickly losing that unsteady, watching-puts-your-heart-in-your-throat baby quality.

We had a busy weekend: N and I spoke in church (and I also taught Relief Society) and we had a barbeque at N’s parents’ house to celebrate my father-in-law’s birthday which was fun. But the big news from this weekend is that E finished earning stickers for his potty chart.

Which meant that it was time to get a bike!

The excitement (and the long car ride) proved a bit much for our protagonist.

But once we were at the store he perked up and we found just the right red (his request) bike complete with a shifter grip on the handlebar that makes a “VROOM!” sound.

And then when we got home Our Young Hero rode off into the sunset (until he reached the end of the driveway and was gently steered away from the street by his mother).

Crafts are great and all, but what this blog really needs is more talk about poop!

E has been in underwear since May and quickly became an ace at peeing in the potty. Pooping was causing some issues, however. After trying bribery and time outs we finally settled on a sticker chart:

E has been wanting a bike for a while now and so N and I figured this would be good motivation for him. I brought the chart and stickers with us on our trip and he is almost halfway there to earning his bike.

But those first few stickers were won with tears and sweat. E was terrified of pooping on the potty and once he held it in for a whole week until we had to resort to mildly invasive measures (i.e. a suppository.) But now he’s doing well. I think he’s even on his way to conquering his fear of public toilets with their alarmingly loud flushes; he used the toilet at the airport which was a big deal.

So in summation, E is a super star.

After several weeks of having E use the potty but still wearing diapers I bit the bullet yesterday and just put him in underwear. (We had three accidents.)

On a more positive note, I took a couple of pictures with my Polaroid–using it is so much fun! I’ll post them as soon as I scan them.

Last week E had to have several vials of blood drawn so they could run tests on his food allergies. As you might imagine, the blood draw did not go easily and kind of traumatized E. It was worse than last year because now E has a much better idea of what’s going on and he’s a lot stronger (it took two techs and myself to hold him still). Anyway, yesterday I took E in to get the test results and to see his allergist for his annual check-up.

Sadly the test results were not encouraging. The tests measure the amount of antibodies in E’s blood that react to specific allergens. Last year his results for milk were already quite high and since then they have doubled to being super high. His results for peanuts doubled as well and eggs and most nuts stayed the same.

All of which means that E is very unlikely to outgrow any of his current allergies. I’ll admit that I was pretty disappointed. From year one to year two it looked like E might outgrow his nut allergies and maybe his egg allergy. But this last year everything just looks worse.

I was feeling kind of down as I drove home. It just hit me again that my son will most likely never be able to eat like a normal person. Right now making sure that he only eats food that’s safe for him is solely my responsibility (and N’s) but what’s it going to be like when he’s in school or away from home? It’s a lot for a little kid to handle.

On the positive side E’s allergist said that there is hope that this new baby won’t have allergies/or will have less severe allergies. She said it’s a combination of genetics and enviroment and that when nursing moms cut allergens out from their diets (like I’m going to do) sometimes kids only end up for a few milder allergies that they outgrown within a few years. I don’t know how much difference it will make since I eliminated allergens from my diet when I was nursing E once we found out about his allergies but he was already seven months or so old at that point.

So while there’s nothing really concrete to go on I won’t be eating dairy, eggs, and nuts after the baby’s born because I will do anything in my power to lessen the chance that another one of my kids has to go through this. On the plus side, this time around I’m a lot more knowledgeable about what our food options will be (and it will probably help me lose the baby weight).

After spending a few hours at the doctor’s office, getting skin tested to see if he could get a flu shot, and then getting the flu shot itself E was pretty wiped out and hungry so on the way home we stopped into a Chik-Fil-A that recently opened near our house.

As I watched E eat his waffle fries and chicken nuggets (his doctor okayed food fried in refined peanut oil) and then run around the playground I felt my spirits lift. While there are a lot of things E can’t eat and he’ll most likely have to be careful of them his whole life it’s not as though he has a serious or terminal illness like some kids do. He’s still a healthy little boy for which I am deeply grateful.

This week has totally kicked my butt. Labor day was nice but something about having a 4-day week made for some extra craziness. Yesterday was picture day at E’s preschool and it seemed as good of a time as ever to get him a haircut. I thought his long hair was really cute and it was reminiscent of the mushroom haircut I myself had as a toddler but it seemed like it was time for a change. (By the way, my mom recently told me my stylin’ toddler haircut was due to her admiration for the lovely Dorothy Hamill.)

But since E’s hair is so fine having it in a shag meant that it would get tangled and limp when he ran around to play and sometimes after his nap it would be kind of matted. It was becoming kind of high maintenance and so as in most instances, my sense of laziness won out over my sense of style. So I got his hair cut and he somehow aged several months in an instant.

I keep vacillating between missing his old hair and liking this new cut. He just seems so much older.

We bought E a little potty chair a few months ago. At first he thought sitting on it was great fun but only if he had his clothes on (which was not really the point). After some cajoling (and bribes of a jelly bean) he has taken to sitting on it a few times a day but he never peed in it.

Until last weekend! I took off E’s diaper so he could sit on the potty but he ran downstairs giggling to see what N was doing downstairs. E jumped on the couch and I told him that it was time to go to the bathroom and he looked down and uh, went to the bathroom. (I guess I should have been more specific.)

N and I shouted for E to stop (which miraculously he did) and then we picked him up and ran him back to his potty chair where his business was concluded, E was praised highly, and jelly beans dispensed.

The couch suffered only a few drops of pee that washed out easily (yay for removable cushion covers!) so over all I consider it a win.