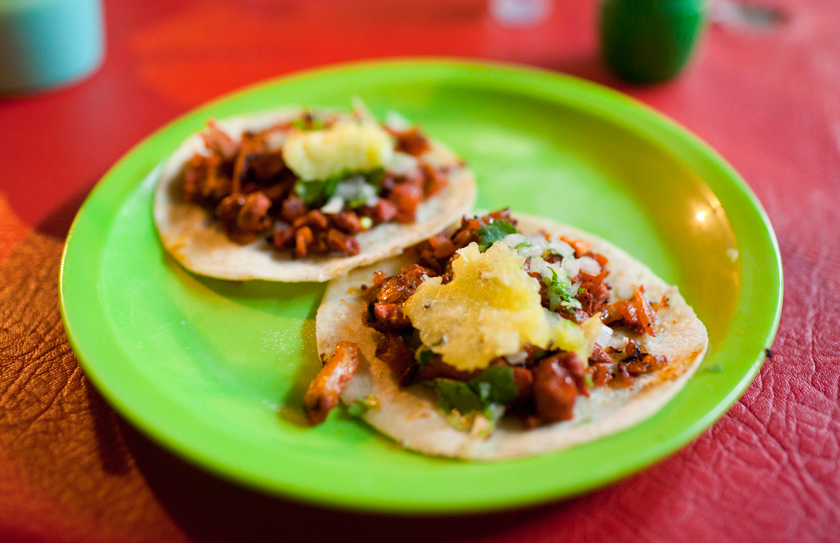 Things have been busy around here.  School ends really early in UT and E finishes next Friday (!)  Our schedule has been crammed with end-of-year stuff along with soccer games and gymnastics.

Before I moved on to other things I wanted to do one more post about our trip in April to Mexico in April.  We went on a taco tour in Cancun which was one of my favorite things from the trip.

I found the Taco Tour on TripAdvisor.  It seemed fun, it was only $15 a person for the tour plus a little extra for the tacos and tips, and the reviews were good.  So I submitted our info on the website and waited to hear back from them.

Merak, the tour guide, emailed me back within 48 hours to confirm and gave me his cell number if we needed to reach him and we (N, me, and 3 friends from N’s company) were set to meet him the following evening in front of a grocery store in Cancun.

Merak was a great tour guide–friendly, knowledgeable, helpful, and passionate about Mexican food and tacos.  We set off on foot from the supermarket and arrived at our first stop for tacos al pastor.

Merak told us that al pastor was invented when Arabic immigrants came to Mexico and brought shawarma with them.  Locals adopted the method of cooking meat on a spit but incorporated local flavors and used pork instead of lamb and al pastor was born.

Merak recommended only ordering tacos al pastor if we were at a restaurant and saw their al pastor on a spit.  N0 spit–don’t chance it! He also said that tacos al pastor normally come with chopped onion, cilantro, and pineapple.  Our tacos were SO good (pictured at the top of this post)  I liked the pineapple.

After that we set off walking to our next stop.  We walked through town and saw locals out enjoying the evening. At one point before we walked down an alley Merak pulled us aside and said that they were remodeling the building on the side so the alley was especially dark right now but not to worry, he wasn’t leading us into an ambush and we we weren’t going to get mugged.  And we didn’t, the end.

The next place was a taco cart in another (better-lit) alley.

This taco cart was across the street from a modern, upscale restaurant which is where Merak said a lot of taxi drivers would take you if you said you wanted good tacos.  He also said that the driver would usually give you a card for a free margarita and then when you redeemed it he would get a kickback because the card had his referral number on the back.

As we walked past the restaurant he told us to look inside and see how many Mexicans were eating there.  There were only a few (mostly eating with tourists) but we went across the street and the tables by this taco cart were PACKED. 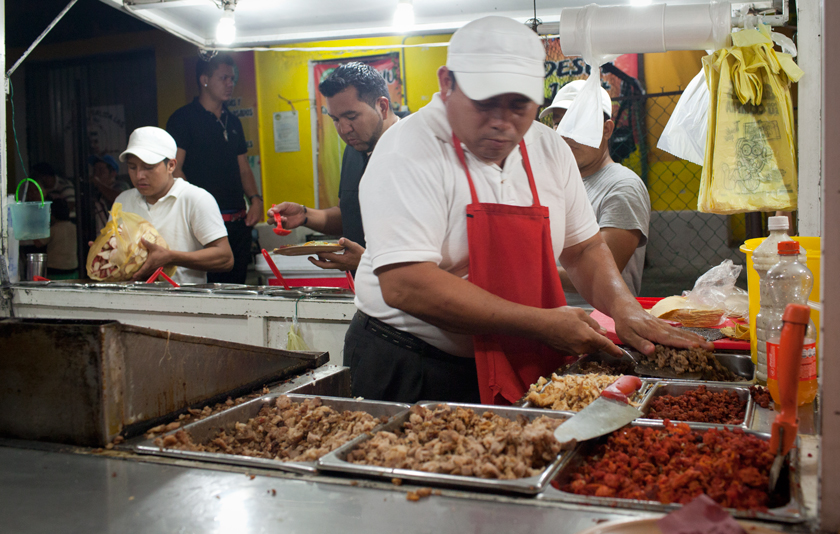 Merak listed his favorite tacos from this stand: chorizo, steak, and tripa (tripe).  As soon as he said the tripe taco was good I knew what I was having!  It was crispy and a little smokey like bacon and really good. 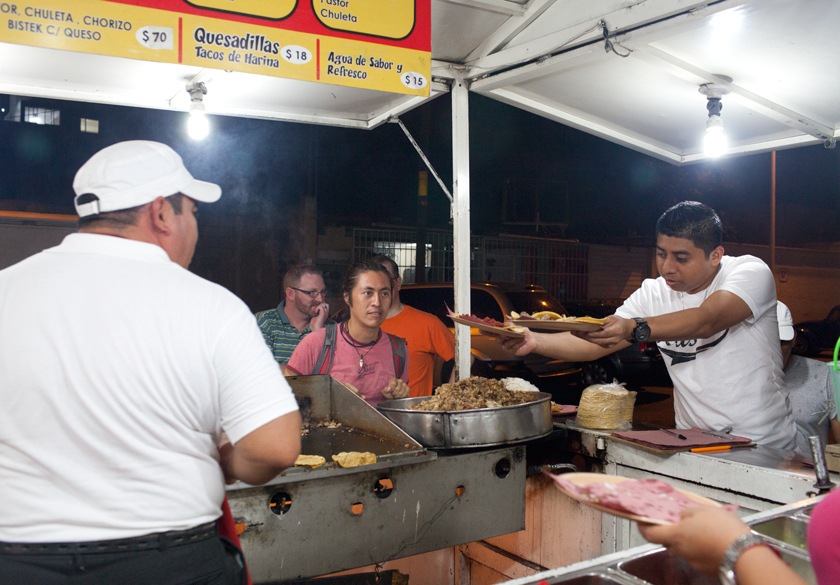 The next place we went was a seafood restaurant.  Merak said because the Cancun is only about 40 years old and developed as a tourist area there isn’t a fishing industry.  People realized they could make more money using boats to take tourist snorkeling and whatnot rather than fishing for a living–you can take tourists out to look at the same fish day after day but if you catch them to eat then that’s it.

Merak said that people also know that the tourists expect to be able to eat seafood in Cancun–so most restaurants bring it in frozen.  Just a few places get it fresh like the one he took us to.

We finished our tour by walking through town to a big town square.  There was a big thatched roof called a palapa over a stage where a singer was entertaining a crowd.  Merak said that people gather every night to hang out as families and enjoy the cooler temps.

Merak told us which vendors to avoid (he had eaten at one of them and gotten sick the week before) and which to consider for dessert.  Everyone ended up getting ice cream at this stall he recommended.  It was all made fresh and there were several local flavors that Merak tried to explain…”it’s a green fruit about this big…the inside is salmon-colored and it tastes kind of a melon but not as sweet.”  The vendor was happy to give everyone lots of samples and everyone ended up with something they liked.

It was such a fun experience.  Merak was a fantastic guide and such good company.  I felt privileged to be able to eat such delicious food and to learn more about locals lives and eat in Cancun.  Everyone in our group was so happy afterward and agreed that we would have paid more than $15 USD for the experience.  Merak said he knew he could charge more but that he didn’t want to, that he felt blessed to get to eat good food and share his love of Mexican food with tourists.

If you go to Cancun, please try to go on Merak’s taco tour!  You won’t regret it. 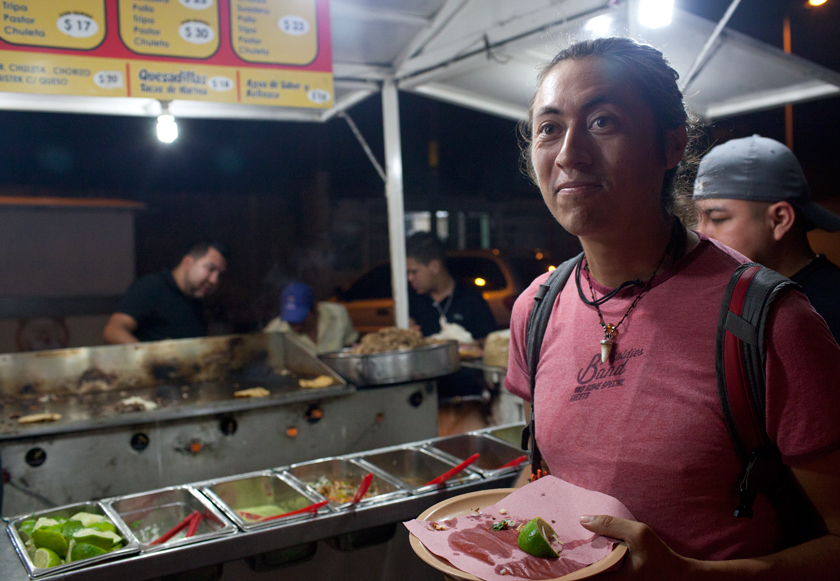 Thanks for the memories, Merak!

And no, I didn’t get food poisoning.  Even from that tripe taco 😉