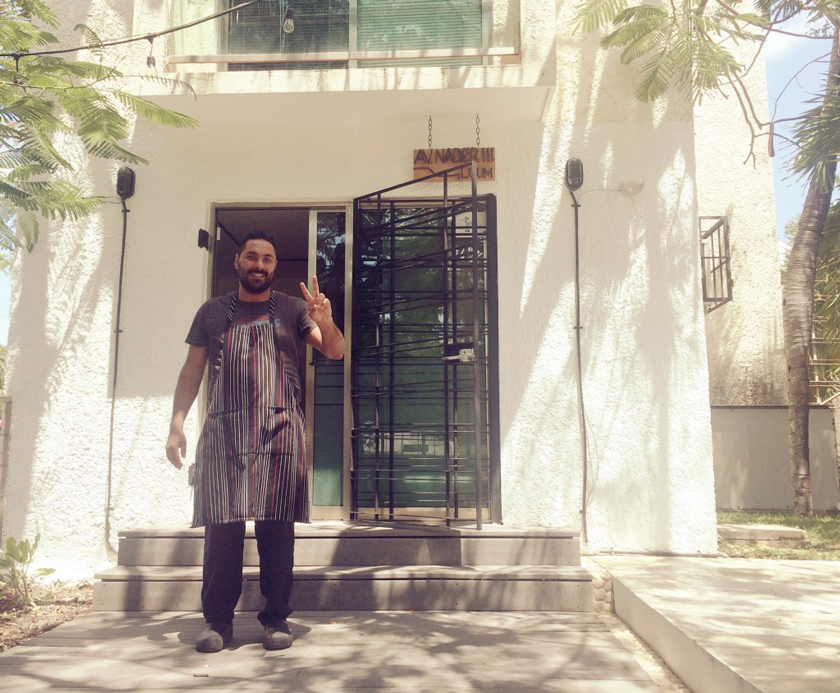 After we finished shopping for produce and chicharrón (fried pig skin) at Mercado 23 with Felipe, we went to his restaurant to cook our 3-course lunch with him.  I was impressed with his restaurant.  While small (it’s in a converted apartment) it was bright and modern and the kitchen was well-organized and impeccably clean.

The first thing Felipe did was make a drink by blending the chaya leaves he had bought at the market and mixing it with sugar water.  The resulting punch was a bright vivid green, herbaceous, and very refreshing.

Then we got started on our guacamole appetizer.

Felipe told us about a traditional snack he would have with his family when they went to the market when he was a kid: they would buy ripe avocados, roll them around to mash the insides, slice them in half, and then use chicharrónes (fried pig skin) to scoop out the avocado.  Delicious!

Next we worked on the pork dish.  We cut a pork loin into thirds and then marinated it in oil, garlic, salt, and Mexican oregano. We put the scraps from the loin into a pan with oil and I browned them on the stove to make a base for the sauce.

Then Felipe put a plancha (a traditional griddle) on the stove to toast ingredients for the pippin mole sauce.

Then Felipe put all the sauce ingredients into his fancy Thermomix and it blended everything up.

We browned the pieces of pork loin on the stove and then Felipe put them in the oven to finish.  And then he plated it up and N and I ate what was probably the best pork dish I’ve ever had.  The pork was so tender and juicy and the pipian sauce was bursting with flavor.  The powder on top was ground toasted tortillas which added a nutty flavor. 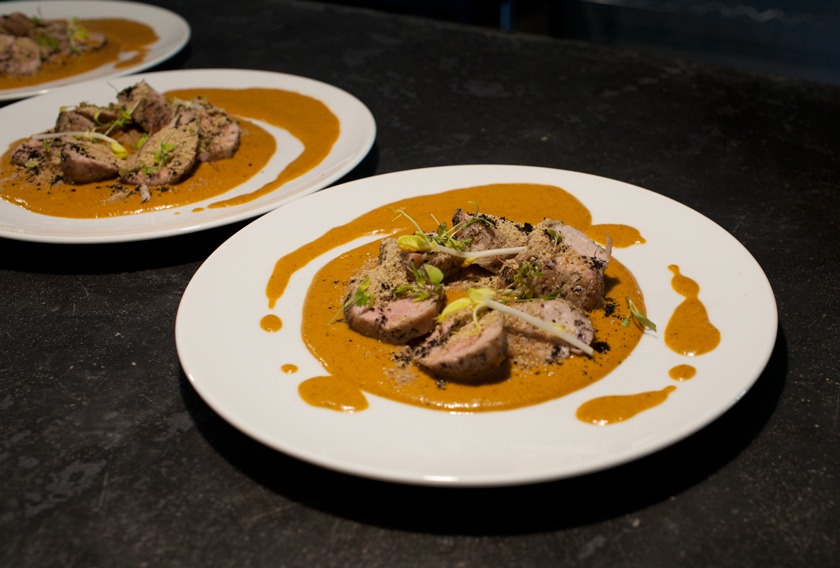 In between working on the other dishes we had also been working on a rosemary creme brûlée for dessert.  It seemed like a normal creme brûlée receive but we added rosemary and scraped half of a vanilla bean into the egg yolk/cream mixture.  After simmering it on the stove Felipe strained it twice before pouring it into small mason jars (which are apparently beloved in restaurants worldwide).

After the little pots of cream mixture were finished simmering in their water bath on the stove we used a torch to carmelize sugar on top.  And then Felipe picked up pieces of rosemary with tweezers, lit them on fire and then blew them out, and then held the smoking rosemary inside the mason jar, shutting the lid to trap the smoke inside.   So when we opened the mason jars you got this whiff of smokey rosemary before you started eating.  It was SO GOOD!

I love creme brûlée in general and this was the best I’ve ever had.  It was so creamy and smooth without any air bubbles because Felipe had strained it twice and the rosemary added this slight herby savory note so the sweetness was even more noticeable in contrast.  Yum.

We had a great time cooking with Felipe.  It was fun to see a professional chef at work.  I noted how he was always cleaning and tidying as he worked and am trying to pick up the habit myself at home.

Our Spanish isn’t very good and while his English was a little better it felt a little awkward at first since it was just N and me, Felipe, and a guide. But as time went on it became easier and easier to understand each other. Funny how that happens 🙂

Felipe told us about how he met his wife when he was the chef at a prominent vineyard in Mexico and she was a sommelier there.  About how he learned to love food from his grandmother and how the name of his restaurant Lu’um means “earth” in Mayan and about how he hopes to share his love of creative food with people through his restaurant.  After a few hours together we swapping pictures of our families on our phones and listening to one of N’s K-pop mixes through the speakers in the kitchen.

It was warm in the kitchen and while it didn’t seem to bother N or anyone else I got hot and sweaty (as I am prone to be–it’s my curse to bear) and Felipe kept aiming the air conditioner at me and pouring me more and more cold chaya to drink which was super refreshing.

My only regrets about the experience were that we didn’t get the recipes written down and I’m already getting fuzzy on the pipian mole ingredients, and that it was our last day in Mexico so we didn’t have time to come back to Lu’um for dinner.  Felipe does a 6-course tasting dinner that sounded fantastic and we would have loved to tried it.  It is now one of my biggest reasons for wanting to go back to Cancun 😉

You can follow Felipe’s restaurant Lu’um on Instagram and Facebook.  If you’re going to Cancun and love food I wholeheartedly recommend eating at his restaurant or the market tour/cooking class we did.  It was one of the highlights of our whole trip.

4 thoughts on “Cancun: Cooking with Felipe”