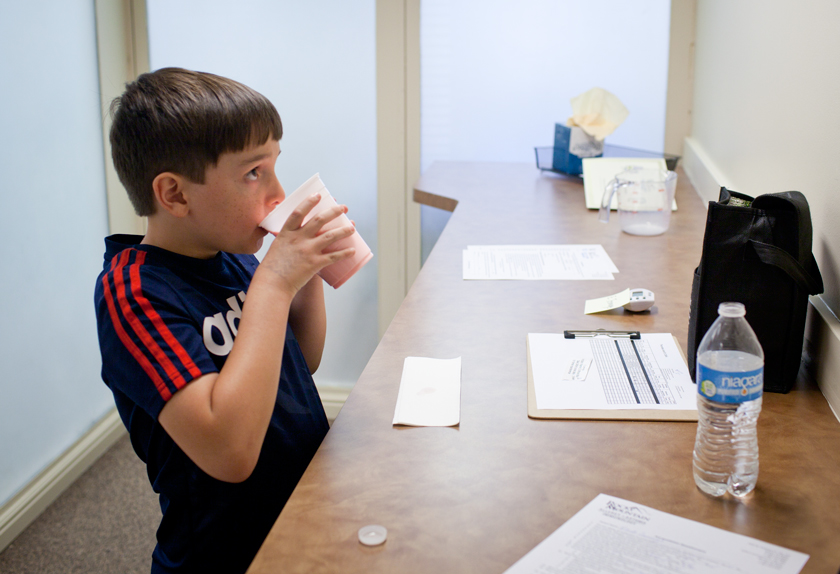 We’ve had an exciting weekend–last Thursday E graduated from milk OIT which means he can now freely eat dairy!  At graduation E drank 300 ml of whole milk (with strawberry syrup in it, natch) with no problem. It’s truly amazing and our whole family feels so grateful.

After our appointment we went straight to dinner at The Pie.  They make great pizza and before it was the only pizza place we could go as a family because they would put Daiya non-dairy cheese on a pizza for E.

But on Thursday, E had his first piece of real pizza with cow cheese and cheese sticks AND an ice cream sundae for dessert 🙂

And he was fine!  Watching him eat all that dairy was AMAZING, almost like I was watching a magic trick and having trouble believing my eyes.

We’ve been going a little crazy since Thursday crossing off things off of E’s dairy wishlist.  He went to Taco Bell for the first time, got the free soft-serve ice cream at Dickies (which both kids have been talking about for months), ate buttered popcorn at the movies, and ate enchiladas with real cheese.

It’s such a trip to see him eat things with dairy.  I keep taking pictures.

E’s still allergic to eggs, peanuts, nuts and shrimp but at graduation we got some good news which which I’ll fill you in on later.

If you are interested in Oral Immunotherapy for food allergies I  recommend our doctor, Rocky Mountain Allergy Asthma and Immunology without reservation.  And this Facebook group, OIT 101, was helpful in answering a lot of my questions.  If you have questions about our personal experience I’d love to hear from you in the comments or in email.

Also, let me know if you have any dairy suggestions of things for him to try!  I’m going grocery shopping today and am getting real cream cheese for bagels, Kraft Macaroni and Cheese, Cozy Shack pudding, and whatever else dairy catches my eye.  I’m giving us a week to go a little nuts and then we’re going to find our new (creamy, dairy-licous) normal.

E’s oral immunotherapy (OIT) for milk is going well but we’ve had a few bumps.  The week after the change to daylight savings E complained about a stomach ache after dosing in the morning.  I texted the on-call Dr. and he said to give him some prescription Zantac which seemed to resolve things.

His stomach hurt 2 or 3 more mornings that week.  Once his stomach was still churning when our carpool came by to take him to school so I sent them on and kept E home for another hour to see if it resolved.  It did so I took him to school, but I admit I was a little nervous until I picked him up and could keep an eye on him myself.

One other day he said his stomach hurt but begged not to take the Zantac because it tasted so bad.  He said he’d throw up if I made him take it and yep, he threw up almost making it all the way to the trash can.

The odd thing was that he didn’t have any stomach issues when he dosed in the evening.  Our doctor said that eating too soon after waking up may be making E nauseated and suggested waking E up earlier before feeding him breakfast.

It was already hard to get E out of bed at 6:15 so the idea of waking him up even earlier was daunting.  But I told him that if he gets out of bed quickly he can play computer games for 15 minutes while I make his breakfast.  It has worked!  Since he started getting up earlier before eating breakfast his stomach hasn’t bothered him.  Hooray for the healing power of computer games 😉

So we are still chugging along.  Right now E’s at 8mL (a little over 1 1/2 teaspoons) of whole milk twice a day.  If other issues come up it may affect things but right now we’re on track for E to graduate from milk OIT in July. 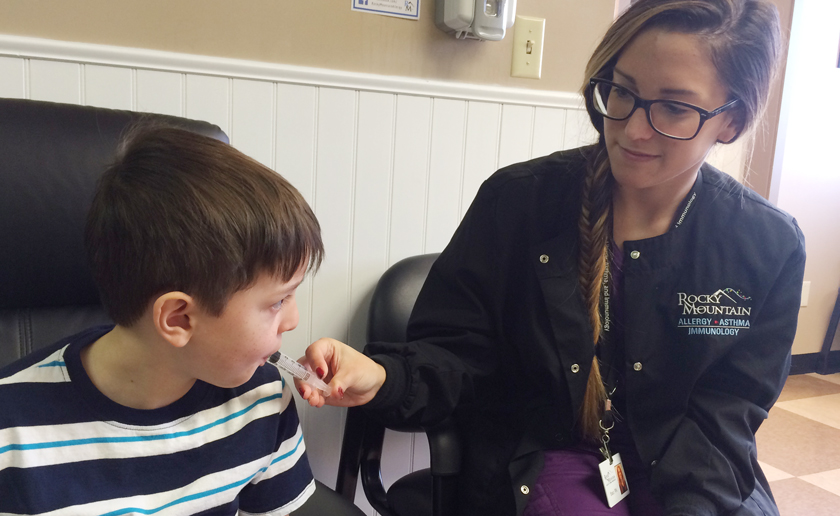